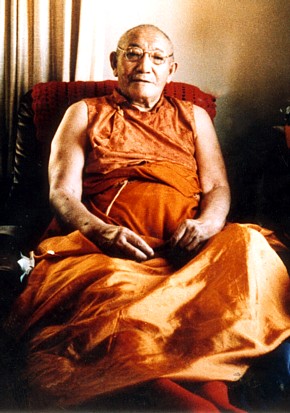 Dezhung Rinpoche (Tib. སྡེ་གཞུངས་རིན་པོ་ཆེ་, Wyl. sde gzhung rin po che) or Dezhung Lungrik Tulku Jampa Kunga Tenpé Nyima Rinpoche (Tib. སྡེ་གཞུང་ལུང་རིགས་ཀུན་དགའ་བསྟན་པའི་ཉི་མ་) (1906-1987) — an important Sakya teacher renowned for his vast learning and realization, who lived the later part of his life, from 1960 onwards, in Seattle, USA, where he taught a number of the world’s leading Tibetan scholars. He was a student of Jamyang Khyentse Chökyi Lodrö and many other masters.

Dezhung Rinpoche was born in the Fire Horse year, 1906, in the Ga region of East Tibet, into a family famous for its skilled physicians. At the age of five, he appealed to his parents to be sent to a monastery so that he could devote his life to the Buddhist path. He was sent to live and study with his uncle, Ngawang Nyima, a monk who spent most of his life in retreat at Tharlam Monastery. At ten years old, he met the great Sakya master Jamgön Ngawang Lekpa, who had just emerged from a fifteen-year retreat. Dezhung Rinpoche regarded Ngawang Lekpa as his root guru and subsequently became his chief disciple, receiving novice monk’s vows from him in 1921. His early education included instructions in the most important treatises of buddhist philosophy, as well as poetics and the mundane sciences. Among his teachers at this time were a  Gelugpa lama, Lobsang Chökyi Gawa, and the great Khenpo Shenga.

At eighteen he was enthroned as the third incarnation of Dezhung Lungrik Nyima, having been previously recognized as his incarnation by Jamgön Ngawang Lekpa. Respect for his root guru led Dezhung Rinpoche to choose as his personal practice the development of compassion through meditation on Avalokiteshvara. Following the guidance of his lama, he received extensive instruction and empowerments from over forty lamas including the renowned Rimé master, Jamyang Khyentse Chökyi Lodrö. These teachings included the Sakya Lamdré and the Compendium of Sadhanas. He also completed over ten years of retreats and travelled widely throughout Tibet teaching and giving empowerments. At the time of Lekpa Rinpoche’s passing, he appointed Dezhung Rinpoche to succeed him as abbot of Dezhung monastery. However, soon after that, Dezhung Rinpoche was forced to flee the country. In 1960, he accompanied Jigdal Dagchen Sakya and his family to the United States to participate in a research project on Tibetan culture and religion at the University of Washington in Seattle. During his more than twenty-year stay in America, he taught and gave empowerments extensively at teaching centres across the USA and Canada, and founded centres in New York, Minneapolis, Boston, Los Angeles, and Seattle. In 1986, Dezhung Rinpoche went to live at Tharlam monastery in Nepal, in order to teach and oversee the construction work. It was there that he passed away on May 16th, 1987, (the 18th day of the 3rd month of the Fire Rabbit year).