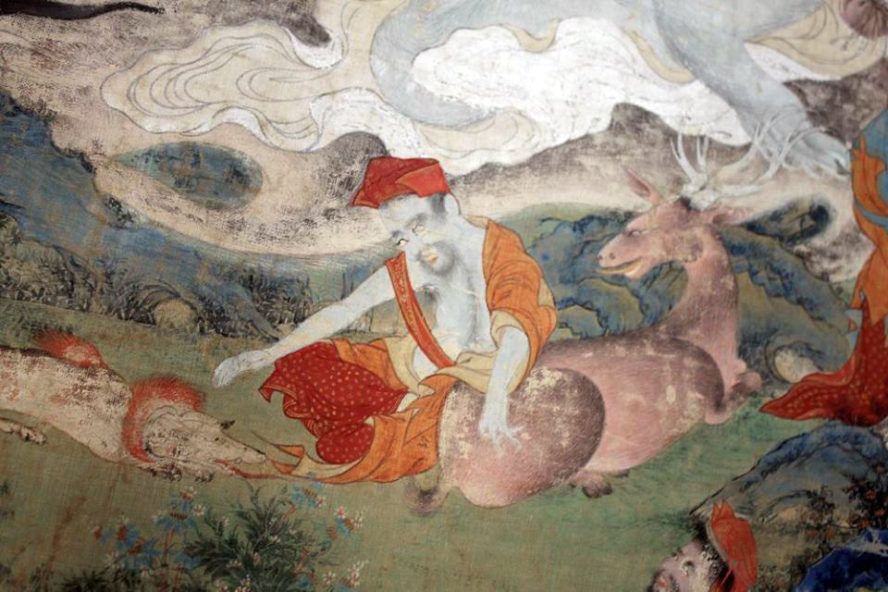 Samsara and Nirvana, in general, all phenomena and all beings belong to one of two types of experience: the cycle of conditioned existence – samsara, and the state beyond suffering – nirvana.

The essence of both samsara and nirvana is emptiness. In other words they are both lacking any intrinsic or inherent reality. Although they are empty of any essence, they are nevertheless manifest. The nature of samsara is confusion whilst that of nirvana is wisdom. The cycle of existences is characterized by suffering and the state beyond suffering is characterized by happiness. When we say that samsara’s essence is emptiness, this means that everything, all animate and inanimate manifestation, the universe and all beings, is nothing other than the combination of apparition and emptiness, form and emptiness. The recognition of this reality is the goal of spiritual practice. Recognizing this empty essence corresponds with the realization of the body of truth, the dharmakaya. All relative appearances are then recognized as being the manifestation or luminosity of the dharmakaya. All phenomena are realized as being empty luminosity. In this realization there is no longer anything in the universe or in beings, which is seen as having the nature of suffering. Instead everything is experienced as empty bliss. When we are no longer under the sway of illusion, suffering appears as emptiness. This is the state beyond suffering, the end of the cycle of death and rebirth, the state of nirvana.

So there are two ways of experiencing reality: the cycle of existences and the state beyond suffering. These two qualities of experience depend upon the presence or absence of confusion in the mind or in other words depending upon whether one’s perception is dominated by ignorance or enlightened awareness. If it is dominated by ignorance, the illusion of duality, we wander in samsara. Once we are aware of the nature of this illusion the veils and impurities of dualistic grasping are dispelled and from then on we experience the dimension of enlightenment. At this point we perceive the true identity of all phenomena as being devoid of any essence. In order to realize this enlightened dimension, which transcends suffering and illusion, we need a path. All those who have attained the state of Buddhahood have done so by following the path, which leads to enlightenment. In the Kagyu tradition this path is called Mahamudra – the Great Symbol.

If the cycle of existences is an illusion created by the mind under the sway of confusion, we may ask ourselves what are the essence and the origin of this confusion. The essence of all phenomena, samsara and nirvana, is emptiness which is without origin or basis. The cause of the manifestation of this cycle of existences is ignorance. Here ignorance signifies the lack of recognition of this empty essence and the belief in an existence where there is no existence. This belief is the source of confusion causing us to grasp at illusory appearances as being real. The interdependence that links the perceived object and the perceiving subject contributes to the perpetuation of illusion. In order to understand how illusion functions we can look at the example of sleep and dreams. In the dream state we identify with what we perceive and we are constantly convinced of the reality of the situations we encounter. Depending upon whether the dream is a nightmare or a pleasant one, we experience feelings of pleasure or fear and we act in just the same way as we do in “reality.” Once we wake up the fear and the delight come to an end, and we realize that it was just a dream, an illusion without any reality or substance.

From the ultimate point of view dreams are empty and lacking any reality. They are nothing more than the projection of habitual tendencies accumulated in our mind. These tendencies create all the illusions we experience. When we wake up we often have a reflex, which tries to give some meaning to our dreams, and we look to them to try to find indications about how we should lead our life. For example we interpret a pleasant dream as a good omen or sign, we feel exalted and we expect we will come across favorable situations. On the other hand if we are disturbed by an unpleasant or distressing dream we imagine that we will encounter difficult circumstances and we become worried or depressed. Why is this? It is because we want to believe in the reality of what is nothing more than the mind’s illusory projections.

We can also apply the example of dreams to the waking state, which we are now experiencing since both of these states have the same illusory nature. Ordinarily we are unaware of the true nature of the world that we experience. We think that everything we perceive is real and stable. The consequence is that we experience suffering. If when we carry out our daily activities we develop an awareness of this dreamlike, illusory dimension we will be able to perceive the empty essence and illusion of everything we experience.

What is wrong with this state of ignorance and confusion? The fact that it is nothing but suffering. All beings imprisoned in this way of functioning undergo countless types of suffering which are repeated endlessly. This suffering has no limits of either duration or intensity. This is the major problem of the mind: falling victim to its own illusion. Attaining enlightenment or Buddhahood is seeing that the reality of mind and manifestation is an illusory, empty dimension, which transcends all suffering. As long as this dimension remains unknown to us we remain prisoners of suffering. We may think that one fine day this suffering will just go away by itself, but this is not the case. If the causes are present the effects remain. As long as there is confusion, the same process will repeat itself infinitely. If we do not make efforts to eradicate the causes of suffering we will continue to wander in samsara. This is why it is called a ‘cycle’ as it goes on endlessly, one existence after another.

Faced with this description of illusion, suffering and wandering in samsara, we may feel sad and discouraged. It may seem impossible to bring an end to this condition of suffering and we may think the state of Buddhahood is something inaccessible. However it would be wrong to think like this. Buddha nature is something we already have; it is our most intimate and fundamental reality. It is not something external to us and it is not far away. So attaining enlightenment is not an impossible goal for an improbable future. The only things we are lacking are the means to realize it. These means are the path taught by the Buddha. By following this path the enlightened nature is revealed to itself.