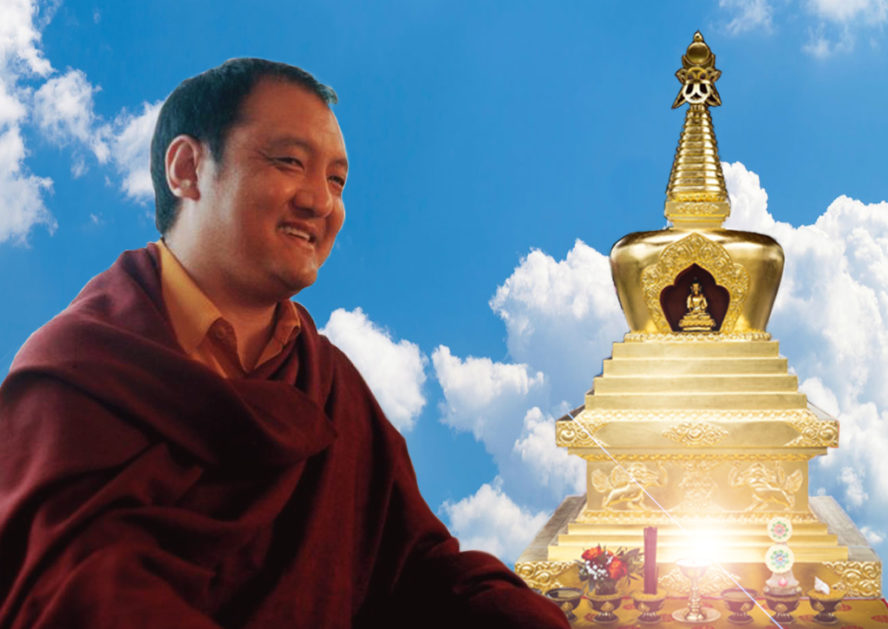 Presentation of the SHAMARPA Stupa Practice

While circumambulating this stupa, one can recite the following mantra, by which we rely on the mind and blessing of the 14th Shamar Rinpoche

What is a Reliquary?

A relic stupa is a precious receptacle in which the relics or remains of a great master are enshrined. A stupa (Sanskrit for “heap”) is a structure containing precious objects, which is used as a support for meditation. The shape of the stupa represents the Buddha, crowned and sitting in meditation posture on a throne carried by lions. His crown is the top of the spire; his head is the square at the spire’s base; his body is the vase shape; his legs are the four steps of the lower terrace; and the base is his “throne.” This present stupa contains relics of the 14th Kunzig Shamar Rinpoche.

The Shamarpa (literally “Holder of the Red Crown”) is a lineage holder of the Karma Kagyu school of Tibetan Buddhism and is regarded to be the mind manifestation of Buddha Amitabha. The Shamarpa is the second most important teacher of the Karma Kagyu School after the Karmapa. The Karmapas are sometimes referred to as the Black Hat Lamas, referring to their Black Crown. Karma Pakshi, 2nd Karmapa Lama, prophesied that “future Karmapas shall manifest in two nirmanakaya forms.” The first Shamarpa, Drakpa Senggé (1283–1349), was the principal disciple of Rangjung Dorje, 3rd Karmapa Lama who gave this disciple a ruby-red crown and the title “Shamarpa.” The Karmapa explained that it symbolized their identical nature, thereby establishing the second line of reincarnate lamas in Tibetan Buddhism, the Karmapa being the first. The Shamarpa is often referred to as the “Red Hat Karmapa.” Rangjung Rigpe Dorje, 16th Karmapa, recognized Mipham Chökyi Lodrö (1952–2014) as the 14th Shamarpa of the Karma Kagyu school of Tibetan Buddhism. He was the founder of the Bodhi Path Buddhist centers worldwide.

What is the Function of a Stupa

In Buddhism, clockwise circumambulation (Sanskrit: pradakhshina) has been an important ritual and devotional practice since the earliest times, and stupas always have a path around them for this purpose. Building, as well as circumbulating, a stupa is considered extremely beneficial, leaving very positive karmic imprints in the mind. Future benefits from this action result in fortunate rebirths, and positive worldly outcomes as well. On the absolute level, one will also be able to quickly reach enlightenment, the goal of Buddhism.