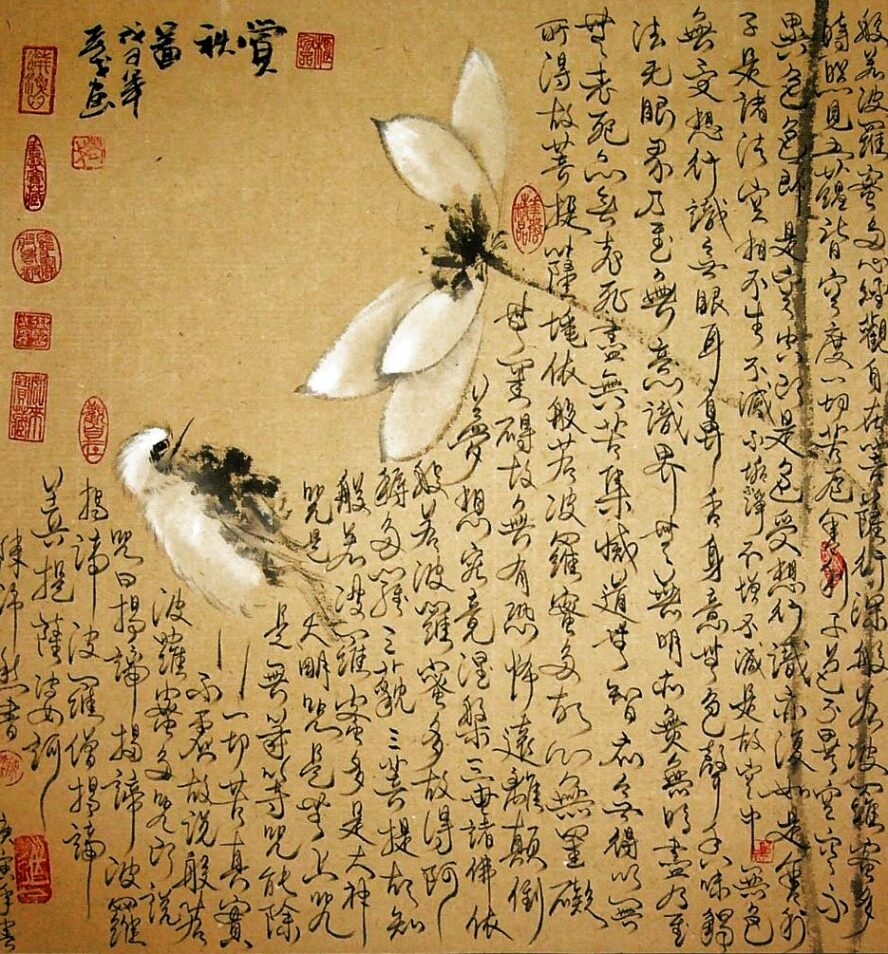 THE SUTRA OF THE HEART OF TRANSCENDENT KNOWLEDGE

Thus have I heard.

At that time the Blessed One entered the samadhi that expresses the dharma called “profound illumination,” and at the same time noble Avalokiteshvara,the bodhisattva mahasattva, while practicing the profound prajñaparamita, saw in this way: he saw the five skandhas to be empty of nature.

Then, through the power of the Buddha, venerable Shariputra said to noble Avalokiteshvara, the bodhisattva mahasattva, “How should a son or daughter of noble family train,who wishes to practice the profound prajñaparamita?”

Addressed in this way, noble Avalokiteshvara, the bodhisattva mahasattva, said to venerable Shariputra, “O Shariputra, a son or daughter of noble family who wishes to practice the profound prajñaparamita should see in this way: seeing the five skandhas tobe empty of nature.

Form is emptiness; emptiness also is form. Emptiness is no other than form; form is no other than emptiness. In the same way, feeling, perception, formation, and consciousness are emptiness. Thus, Shariputra, all dharmas are emptiness. There are no characteristics. There is no birth and no cessation. There is no impurity and no purity. There is no decrease and no increase. Therefore, Shariputra, in emptiness, there is no form, no feeling, no perception, no formation, no consciousness; no eye, no ear, no nose, no tongue, no body, no mind; no appearance, no sound, no smell, no taste, no touch, no dharmas; no eye dhatu up to no mind dhatu, no dhatu of dharmas, no mind consciousness dhatu; no ignorance, no end of ignorance up to no old age and death, no end of old age and death; no suffering, no origin of suffering, no cessation of suffering, no path, no wisdom, no attainment, and no nonattainment.

The prajñaparamita mantra is said in this way:

Thus, Shariputra, the bodhisattva mahasattva should train in the profound prajñaparamita.”

When the Blessed One had said this, venerable Shariputra and noble Avalokiteshvara, the bodhisattva mahasattva, that whole assembly and the world with its gods, humans, asuras, and gandharvas rejoiced and praised the words of the Blessed One.

Lotsawa bhikshu Rinchen De translated this text into Tibetan with the Indian pandita Vimalamitra.It was edited by the great editor-lotsawas Gelo, Namkha, and others. This Tibetan text was copied from the fresco in Gegye Chemaling at the glorious Samye vihara. It has been translated into English by the Nalanda Translation Committee, with reference to several Sanskrit editions.© 1975, 1980 by the Nalanda Translation Committee. All rights reserved